Home Retirement 5 Money Mindsets That Could Hurt Your Retirement

In the not-too-distant past, American workers could count on their employers to take care of them when it came time to retire. Unfortunately, that’s no longer the case for the vast majority of us. When it comes to retirement, we’re on our own. The problem is that many of us need to be saved from ourselves.

Poor habits and bad financial decisions are tough enough to deal with when you are gainfully employed, but they can really destroy your retirement dreams. The stock market’s been on fire and everything seems rosy for many people, but good times won’t last forever and we should have the long term in mind at all times. Are you guilty of one of these retirement-killing bad money mindsets?

1. Assuming you’ll save more later. It’s very easy to procrastinate on setting up retirement accounts and making saving a priority. You’ve got a paycheck now and too many places to spend it. Maybe in the future, when you’ve gotten a raise or two, you can amp up your retirement savings. But that kind of thinking is a great way to have no savings for retirement. You can’t count on higher paychecks in the future. And even if you do make more later, any day you wait is a day lost to the magic of compound interest. There are plenty of ways you can get bailed out and still live a comfortable retirement, but none of them are guaranteed and the chances of any of the good fortunes happening aren’t great. The only thing you can count on is that you can do the responsible thing now.

2. Putting yourself last. We all want the best for our children and our families, but it’s dangerous to sacrifice your own future for them. Don’t be tempted to fund your child’s college education ahead of your own retirement—they can always take loans to continue their education, but there is no loan for retirement.

On the flip side of the coin is trying to financially take care of aging parents or other hard-up family members. While it can be difficult to watch your loved ones struggle, don’t allow their financial problems to become yours. It could start a cycle where your children feel obliged to sacrifice for you because your “retirement” was spent on the previous generation—and it could continue on down the line. Give yourself and your family the gift of a well-funded retirement. 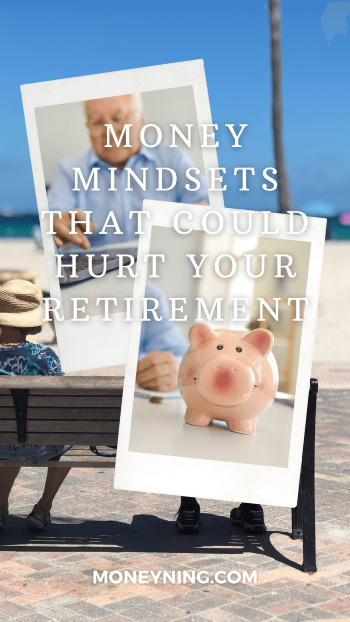 3. Thinking you’re invincible. The solution seems simple for many who haven’t saved enough for retirement: just work longer. But that assumes any number of things can’t and won’t go wrong, including a pink slip, illness, or injury. If the pandemic has taught us anything, it’s that the world is unpredictable. Who would’ve thought that so many governments around the world would actually force businesses to shut down?

My friend owns a couple of bars and made a small fortune catering to tourists in a city nearby before the pandemic hit. Money problems were far from his mind just a couple of years ago. But he told me he lost over $400,000 last year because bars are deemed high risk and were forced to close for much of the year. And even when they were allowed to open, they were not allowed to have more than a handful of customers at a time. On top of that, they had to pay a boatload on cleaning supplies and masks for all their workers.

He’s been fighting for his survival for months, but it could be worst. He can’t even imagine how tough it has been for his employees who he’s had to let go, re-hire, just to let go again. Life is unpredictable. Hope for the best but plan for the worst—so make sure you can retire even if the date of your retirement is not entirely under your control.

4. Tapping your retirement for emergencies. Sometimes crises arise and your emergency fund isn’t enough to cover the expenses. It can be tempting to look at all the lovely cash sitting in your retirement accounts and think about how it could solve your crisis. But not only is this a dangerous precedent to start—you never want to view your retirement as a cash cow you can tap anytime you want—but you’ll also be hit with any number of penalties for using the money early and for anything other than retirement. Then there are the taxes you’ll pay on top of that. You could easily lose half or more by taking money out prematurely. Pretend that money isn’t there until you need it, and find other ways to deal with financial emergencies now.

5. Underestimating the destructive power of inflation. Most people understand that inflation wreaks havoc on any budget, but few people plan for it. Just look at those around you who’ve retired. Have you noticed that many of them start out living pretty comfortably and then they slowly become more and more frugal? Why do you think that is? When you plan for your golden years, it’s simply not enough to assume that your spending will stay the same forever. If you want to maintain your quality of life, it’s mighty important to not only plan for a sustainable withdraw but an ever-increasing one.

We can’t count on our future selves to be more responsible than we are now. And even if we can, life is unpredictable. Think ahead to what choices your future self will wish you had made—and make them!

This article originally appeared on MoneyNing.com. Let us know what you think (or read what others thought) here.

The post 5 Money Mindsets That Could Hurt Your Retirement first appeared on MoneyNing.

What Is Financial Independence, Retire Early? Answers To FAQs About FIRE

Do You Really Need to Replace 80% of Your Income In Retirement?

Social Impact Investing – What It Is and How to Get Started

6 Ways to Save on an Engagement Ring – Cheap Diamond Alternatives

Social Impact Investing – What It Is and How to Get Started

6 Ways to Save on an Engagement Ring – Cheap Diamond Alternatives

Make the most of your money, from investments, savings, retirement and financial planning. Get expert opinions and top tips. All the latest news, videos, guides
Contact us: contact@the-smart-money.com